However, while schools can deliberately propagate a certain national or transnational identification, their very structure and daily operation can help create and reproduce a different one. For instance, at the level of ideology, schools can propagate a non-national imperial patriotism or a supranational multicultural patriotism, while in effect they can be producing particularistic national identifications by grouping pupils according to ethnolinguistic categories and/or by employing such categories in textbooks and teaching.

Why the Slovene Case?

Because of that, a reexamination of historical contingencies and agents that enabled the emergence and the evolution of the Slovene nation is necessary! While the role of nationalists and their organizations certainly cannot be ignored and needs to be studied further, a handful of studies have already argued that the states in which the Slovene nation emerged and reproduced itself were also conducive to the formation and consolidation of ethnolinguistic nationalism–often unintentionally and sometimes contrary to their stated goals.

Consequently, schools warrant a new look. Their significance for the functioning of nationalizing states has been known at least since Eugene Weber's seminal book Peasants into Frenchmen. Far less acknowledged and examined is their role in those states that did not define themselves as nation–states and did not aim to nationalize the population. We can nonetheless hypothesize that schools were instrumental in nationalizing the population in those states as well.

The primary objective of this research project is to analyze how the emergence of the Slovene nation as a viable mode of group building and its continued existence are related to the presence and employment of various national classifications in elementary schools. The project will pursue this goal by analyzing both school ideology and everyday practice in three centuries and three states: the Habsburg Empire, Yugoslavia, and Slovenia.

These are, of course, very different polities, but they have nonetheless taken turns in the role of the framework in which Slovene nationalism arose and evolved in the last two centuries. Analyzing this process in the longue durée is one of the central features of the project. It will enable a comparative approach, where various classifications will be observed and different policies regarding their application and promotion contrasted.

While the research project will focus on the territory of present-day Slovenia, it promises to produce a novel understanding of the role elementary schools—and classification more generally—have in making nations relevant and persistent categories of identification. This will have wider relevance and could be applied to comparable cases.

Rok Stergar is an Associate Professor at the University of Ljubljana, where he has been teaching courses and seminars on Balkan history in the nineteenth and twentieth century and the history of World War I. The focus of his research are nationalisms in the late Habsburg Empire, and he has published several articles in journals and edited volumes on the topic.

Karin Almasy, a researcher and lecturer at the University of Graz. Her research explores early nationalism and the role of language and school system in the processes of nationalization in the Habsburg Empire. The research of late Habsburg Slovene textbooks, especially the book Kanon und nationale Differenzierung: Übersetzung und ideologische Steuerung in slowenischen Schullesebüchern (1848-1918) (2018), informs the thinking behind this project proposal to an important degree.

Jovana Mihajlović Trbovc, a research fellow at the Research Centre of the Slovenian Academy of Sciences and Arts, who received the 2015 Jean Blondel PhD Prize for the best thesis in politics issued by the European Consortium for Political Research and was a visiting fellow at the University of Graz. She was granted postdoctoral project by the Slovenian Research Agency and has been participating in three Horizon 2020 projects. She has been publishing on reproduction of the historical narratives in the school textbooks and print media in former Yugoslavia.

Tamara Pavasović Trošt, Assistant Professor at the University of Ljubljana and previously a visiting professor at the University of Graz and Princeton University, who recently co-edited Changing Youth Values in Southeast Europe: Beyond Ethnicity (2018) and published “Ruptures and Continuities in Nationhood Narratives: Reconstructing the Nation through History Textbooks in Serbia and Croatia” (Nations and Nationalism), which received the 2017 Jacquin-Berdal prize for the best original research article on nationalism among young researchers.

Marko Zajc, Assistant Professor at the University of Primorska and a research fellow at the Institute of Contemporary History in Ljubljana, a historian of nationalism in South East and Central Europe, and Yugoslavism, principal investigator in two completed research projects granted by the Slovenian Research Agency, a visiting fellow at the Imre Kertész Kolleg and at the Humboldt Universität in Berlin.

Jan Bernot, a PhD student at the University of Ljubljana. He has an MA in history and is currently working on a thesis on identifications in rural Carniola in the late Habsburg era.

Neja Blaj Hribar, a PhD student at the University of Ljubljana. She is a coordinator of the Research Infrastructure Program at the Institute of Contemporary History. She has an MA in history and is currently working on a thesis on immigration to Slovenia in the interwar era.

Jasna Dragović Soso, Professor of International Politics and History at Goldsmiths, University of London, who was previously a Research Fellow at the School of Slavonic and East European Studies, University College London. Her research focuses on nationalism and the role of intellectuals, state disintegration, nationalist (‘ethnic’) conflict and international intervention, and transitional justice and the social construction of memory. It has been shaped by an interdisciplinary approach and a focus on the former Yugoslavia and its successor states.

Siniša Malešević¸ a Full Professor in the School of Sociology at University College Dublin, who previously held research and teaching appointments at the Institute for International Relations (Zagreb), the Centre for the Study of Nationalism, CEU (Prague), the National University of Ireland, Galway, the London School of Economics, the Institute for Human Sciences (Vienna) and Université Libre de Bruxelles (Visiting Professor/Eric Remacle Chair in Conflict and Peace Studies). He is one of the leading scholars of nationalism and ethnicity, author of more than ten books and numerous articles in leading academic journals, and has been principal investigator for several research grants.

Alexander Maxwell, a Senior Lecturer in history at the School of History, Philosophy, Political Science and International Relations at Victoria University of Wellington. He is a leading historian of the late Habsburg Empire, publishing particularly on Habsburg Panslavism, Slovak nationalism, and Hungarian cultural nationalism. He has also published several articles on nationalism theorists and theory of nationalism. In 2018 he edited a themed issue on nationalism and classification for the journal Nationalities Papers. He intends to spend the first months of 2021 in Ljubljana.

Pieter Troch, a postdoctoral researcher at the University of Regensburg. He is a social historian of the Yugoslav twentieth century; his book Nationalism and Yugoslavia: Education, Yugoslavism and the Balkans before World War II (2015) and articles on education and nationalism in interwar Yugoslavia published in leading academic journals such as Nations and Nationalism, Nationalities Papers and the Slavonic and East-European Review, positioned him as the leading expert on the topic central to the project.

The first phase (months 1-2) will start with a kick-off meeting; afterwards, team members will identify their case studies, review relevant secondary literature, and enter it in the shared bibliographic database.

In the second phase (months 3-16), team members will collect primary sources in archives, libraries, and school museums. Public domain sources will be digitized and published on the web portal SIstory. To facilitate analytical coherence, team members will further develop a common set of research questions. At the end of the second phase, a workshop that will include advisory board members and other outside experts will be organized to refine the research questions.

In the third phase (months 17-32) team members will analyze and interpret their case studies, deploying the common set of research questions and thus ensure comparability of interpretations.

In the fourth phase (months 33-36) team members will be discussing and assessing each other’s work, drawing out comparative conclusions and refining the interpretations for the publication of the results in an edited volume. A second workshop that will again include advisory board members and other outside experts will help team members gather feedback and fine tune the results.

On Monday, 21 September 2020, the kick-off meeting of the project team for the research grant »Schools and Imperial, National, and Transnational Identifications: Habsburg Empire, Yugoslavia, and Slovenia« (J6-2573), awarded by the Slovenian Research Agency, was held. 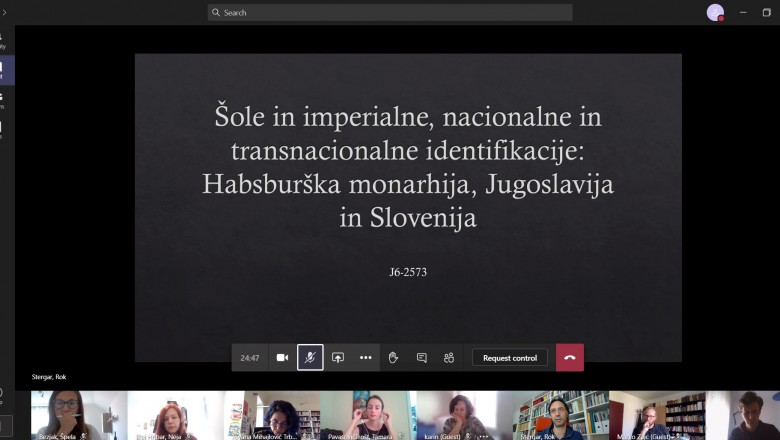 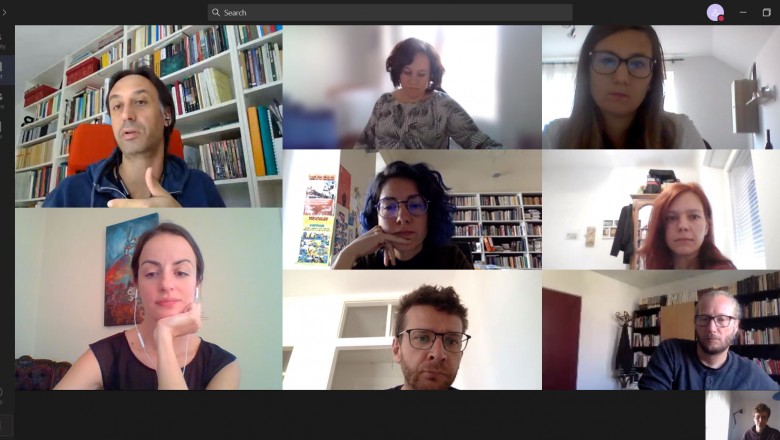 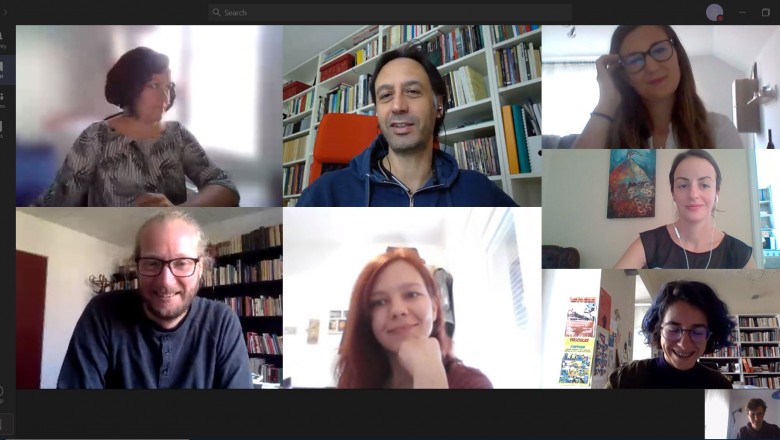 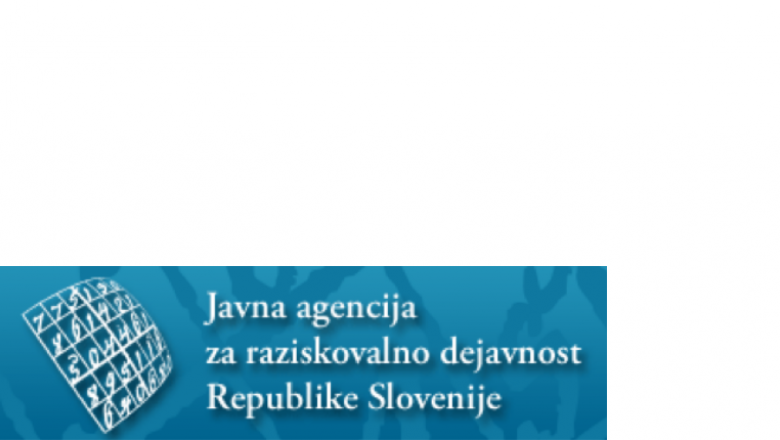